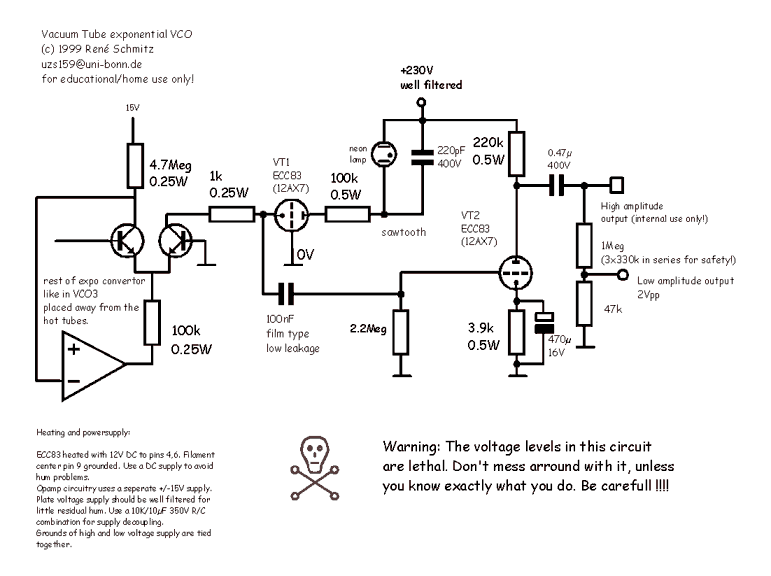 A few warning words: This circuit uses pretty high voltage levels. Its certainly not to be built by people who never worked with high voltages. If you have doubts don't do it. If you do it, please be careful not to harm yourself.

One could say about this circuit that it puts a bridge between the "classical" VCO circuits found in vintage solidstate based synthesizers, and the circuits of the early pioneers of voltage controlled musical instruments like Trautwein, Sala and others. Unlike the Trautonium - which also had a VCO - this one obeys the 1V/oct standard that their modern successors use (at least in a 1-2 octave range). So one is able to modulate frequency, do transposition with voltages, use CV-interfaces and all the handy things that a solid state based circuit allows. To archeive this I made it a hybrid circuit employing solid state, vacuum tube and gas filled tube technology. Its my belief that neither technology is superior over the other and that a practical solution will have to employ both. As you can see from the schematics there is no solid state after the exponential convertor. The audio path as well as the oscillator core is built entirely with tubes.

On the left you can see a partly drawn exponential convertor. I only drew it to show the features of this part of the circuit. I use a small reference current thru the 4.7M resistor. And the lower 100k resistor delimits the maximum current thru the convertors output. This is necessary, since above a certain current the neon lamp will permanently glow, and the oscillation stops. This value will perhaps need to be adapted, since different neon lamps will have different characteristics. To complete the convertor, copy the convertor of the VCO3, or some other VCO. Use a temperature compensated scheme, because of the heat produced by the tubes. The current generated by the convertor flows into the cathode of VT1. This is a grid grounded amplifier, which takes the high voltages away from the transistors. The plate current is essentially equal to the cathode current. This current flows thru the oscillator core, which is formed by the neon lamp and the cap. Since plate and cathode have the same currents I could decouple the signal at the cathode side thru the 1K resistor. Signal swing is about 500mV here while it is about 100V at the plate side. This small swing is then amplified by a common cathode amplifier formed by VT2 and its associated components. The high amplitude output could be used to mix several of these VCOs together with a lossy resistive mixer, and maybe fed to another tube amplifier to refresh and distort the signal. The low voltage output has an amplitude of about 2Vpp which can be used with low voltage circuits provided that you keep the load impedance high. The waveform is a pretty clean sawtooth. The frequency ranges from a few Hertz to 3-4 kHz.

First of all I was suprised that this oscillator shows little residual FM from the unregulated power supply. But this is due to the neon lamps, their discharge threshold is independant of the supply voltage. So any hum only shows up additively in the output signal. Not as a frequency modulation. Second thing that I noticed is that the thresholds of the neon lamp are dependant on ambient light. So one should cover them with black paint. Unfortunately. I had wanted to mount them visible. They are probably also sensitive to temperature changes. However this doesn't mess up the 1V/oct behaviour! It only detunes the circuit which can be corrected with the tune pot. So as long as the temperature (or light) stays roughly constant you won't notice that.

One could probably run this circuit with lower voltages than the 230V I used, perhaps you have to lower the plate resistor of VT1. Also it is surely possible to use a linear current sink instead of the exponential one.

I'm sure the concept of current control like in this circuit can be used with thyratron based oscillators as well.
In the meantime this has been put into reality by Ken Stone, take a look at his exponential controlled thyratron VCO.