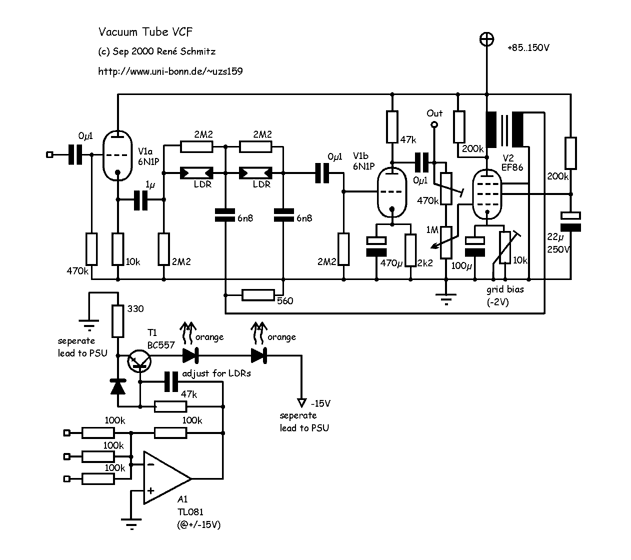 This circuit is not for beginners, or people who are frightened by high voltages. If you feel you don't have the necessary skills, then leave it. I will not take responsibility for any damage or injury resulting from the use/misuse of information contained in this page. These kinds of disclaimers are becoming too popular, don't they ?! ;-)

I've long wanted to build a filter based on tubes, because it is something challenging. So here you can see my result. At first I had toyed with the idea of using vacuum diodes as the control element, but as you can see I did not. Merely for the reason that I tried LDRs first. Maybe I'll try a version with VT-diodes later. (That would be similar as in the MS 50.) The circuit is designed to be used as part of my "all" tube synthesizer, so there are a few restrictions when interfacing it to solid state circuits.

The circuit is a very basic Sallen and Key filter, basically the topology of the MS 20 filter which you can see on the filter page of this site. The noninverting amplification which the S&K requires is done with two tube systems - a triode, which also delivers the output, and a pentode. I could have used the plate of the pentode directly as the feedback signal, but I included a transformer, to provide a low impedance. (Its nothing special, I used a 230V to 24V 2W power transformer. The other option would have been another tube. The 200k at V2s plate is used to provide damping to the tuned circuit which the transformers inductance forms with the parasitic capacitances. Adjust it to your needs.) The input tube is used as a cathode follower, to provide a high input resistance, and to present a low impedance to the filtercore. This could be omitted if the circuit is to be driven from a signal with a low output impedance, e.g. an opamp. The output of the circuit is decoupled at the plate of V1b, which can produce some quite high output swings, 50-80V are possible when the resonance is fully up or a large input signal is present, so a voltage divider is mandatory (although not shown)! BE CAREFUL! There are adjustment points in the circuit, one sets the maximum resonance level, and the other is used to find a suitable quiescent point for the pentode. (You can unplug V1 from the circuit and apply a small signal at the "output", and observe the signal at the transformer secondary. Adjust for maximum linearity, check the resulting cathode current to be less than 3mA.)

I've used 6N1P for the dual triode, and a EF86 (6J32) for the pentode stage. They're both still made in Russia, and available through Svetlana. The 6N1P looks especially cool when heated, since the plates are open at the side, and thus you can see the grid and cathode at full length.

The circuit has very low distortion when driven from small signals, input swings of 1V and greater result in asymmetric soft-clipping. This and the dynamics of the tubes (which is next to impossible with solid state) results in a filter whose sonic characteristics depend largely on the input amplitude. For example you can use selfoscillations together with high input overdrive, and have the input signal dominating. Tubes are very forgiving (...or should I say rewarding...) when it comes to overdrive. Note the absence of negative feedback. It has a moog-esque resonance, since the transformer poses a highpass, which alters the filter characteristics at low frequencies. Although sharing the general topology, the absence of the clippers of the MS 20s resonance loop (but the grids delimit the feedback somewhat), makes it sound unlike the MS 20. Its not nasal or something. The resonant ripple appears at the corners, not the center. It can sound clean and soft or can do pleasurable second order distortions, up to more screaming sounds.

There have been a few things influential, first of all perhaps the discussion on the Borg Assimilator filter from Grant Richter at synth-DIY which led me to the use of LDRs.

And the vcf5t from Tom Gamble which inspired me to use the S&K topology.