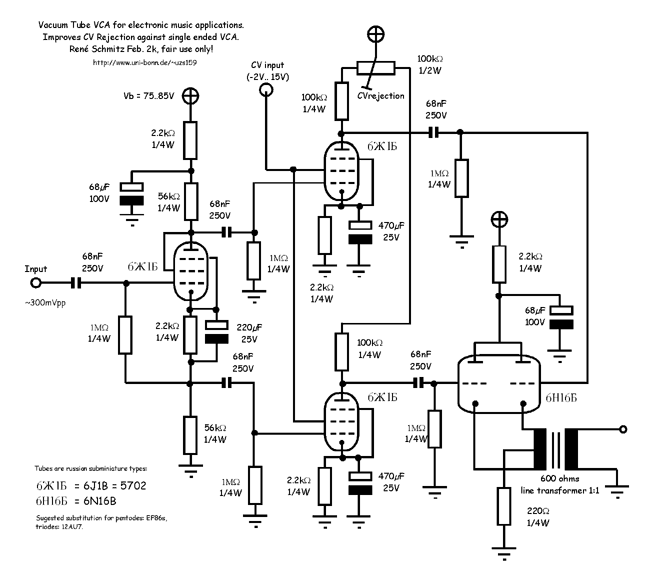 This circuit started out from a few experiments I did with subminiature (pencil) tubes. I built a version of Eric Barbours VCA, upon which this design is based. The size of these tubes made it appear feasible to try to build a more complicated VCA, which improves the control rejection compared to the single ended circuit of Eric Barbour.

The circuit is nothing more than two single ended VCAs. They are driven from two antiphase signals and their outputs are subtracted in the output transformer. So the control feedthru appears in antiphase at the transformer, while the audio signals are in phase.

The first tube in the circuit is a cathodyne circuit, which is a simple phase splitter with a gain less than unity. It puts out the antiphase signals for the two paralleled variable gain amplifiers. Here the gain can be set with the screen grid voltage. The output stage is a cathode follower, which allows to use a cheap and easy to get transformer (1:1 with center tap, and 600 Ohms, often used in telecomunications).

It is probably difficult to source exactly the same types that I used, they are (sowjet-) russian subminiature types. About 1cm in diameter and 3cm long. They come with wire leads to solder them onto a PCB. I used matrix board to build it. I haven't done extensive searches for the tubes, they were just what I could get my hands on easy. I guess there are many possible substitutions, some may require tweaking the circuit a little. The input pentode is used in triode mode, so a "spare" triode system can be used as well.

First of all, this circuit has a very pleasurable distortion. It can be nicely overdriven and it gives the sound something "guitar-ampish". When smaller (less 300-400 mV) amplitudes are applied the circuit is very linear. Gain is about 20 with a 10V control signal. Control feedthru can be minimized, but this minimum is still more than for a good semiconductor VCA. I haven't done extensive measurements, but I estimate it to be about what an untrimmed CA3080 VCA will show. But still a lot better than a single ended circuit alone. The circuit can be easily interfaced to usual envelelope generators, if you shift the signal down by about 2 Volts. I found that the RC decoupling networks are absolutely necessary because otherwise the circuit oscillates at subaudio rates ("Motorboating"). I power the circuit with about 75 volts. The PSU is made out of standard parts, a 2x30V transformer, both secondary windings put in series. This gives about 85 volts. From the PSU I've put a 1k/68µF network to the VCA. I use DC heating, the VCA is relatively quiet regarding hum. I plan to make future valve circuits operate with that powersupply. If you have higher voltages in your system, its always possible to divide them down, or use zeners, neon lamps etc.


A final word on safety: Be careful, high voltages can be dangerous! When probing arround in the circuit, keep one hand in your pocket.


A more readable version of the diagram