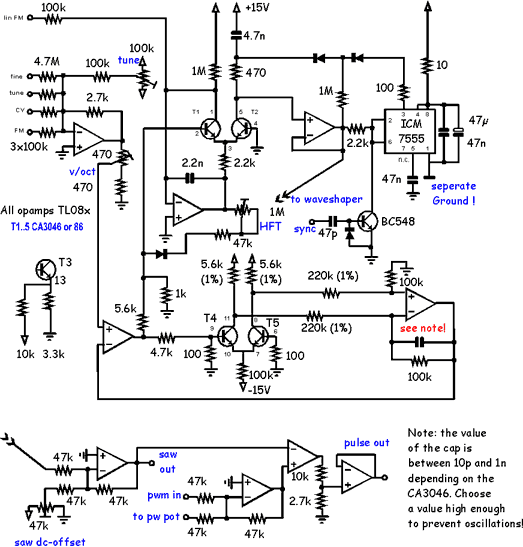 This is an improved version of VCO 2, the main difference is in the discharge section, here I've used two diodes instead of the MOSFET of the VCO 2. The result is that the waveforms are much cleaner. (The VCO2 produces a spike at the reset and also a small flat portion.) I've played the same trick as in the VCO 3 to improve the sweep range. If the output of the 7555 is low, then the cathode of the left diode is held at nearly the same potential as the anode. Thus cheap 1N4148 diodes can be used instead of special low leakage types. The highest cycle time is about 2 minutes, and 50 to 70 kHz can be reached on the high end. Also this diagram shows the temperature compensation amplifier. The waveshaper of the VCO3 could be also added to give sine and triangle outputs. Also I had to change the high frequency tracking trimpot, because in this circuit second trippoint of the 7555 becomes effective. (Other than in the VCO2 where the MOSFET quickly charged the cap to 15V.) The components for this module are easier to source, since no exotic parts are used. Seperate ground wires for the 7555 are recommended, to prevent soft-syncing between multiple units. If you don't want to do that then tie the power connections of the 7555 directly to the point where the power enters the board.