Nothing fancy, just my own version of the late MS 20 filter. Uses opamp buffers instead of the darlingtons. And 3080 instead of 13600. This saves a few resistors. (I was lazy.) I replaced the string of three diodes in the original filter with a green LED. I don't know if that alters the sound much, but the circuit has the sound usually attributed to this type of filter. I raised the gain of the feedback so that one can make some weird noises with it.

The circuit as it stands is really only the second half of the original Korg filter. The MS20 has two nearly identical sections, the first is configured as a highpass, followed by the lowpass as depicted. If you want to add the highpass section you have to insert the input signal at the grounded end of the 1n cap between O2 and A2. That is, instead of grounding that end, connect it to your input signal. In my incarnation I've merely used a phone jack with a switching contact, so that the end is connected to GND when nothing is patched there. 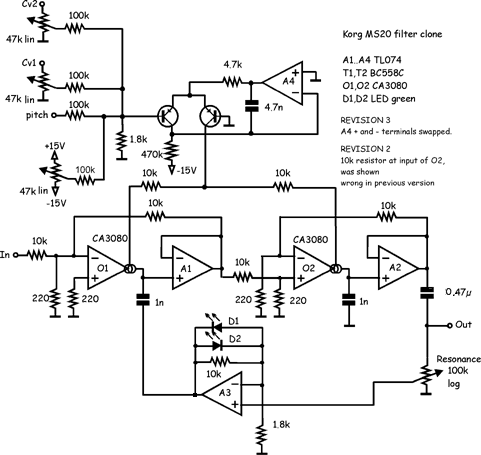