The idea is to make a self contained little do-that, which allows you to create droning textures. The whole circuit is just 2 ICs and a bunch of passives. There are three oscillators, built from 3 gates of a CD40106 (74HC14 can be used as well). Three pots allow to set the frequencies of these oscillators. The raw oscillator sounds are mixed to the output using three pots. Also a fourth signal is generated by putting the signals into a nonlinear combiner, where various sidebands are produced. That is realized with a 74HC151 demultiplexer. There are 8 switches that change the way the three oscillators are combined in numerous ways. If all switches are on, or all are off no sound is heared. (Also one could make use of the HC151's enable input at pin 7 to mute the signal.)


The circuit can be put into a small case, and supplied by three 1.5V AA or AAA batteries. The power consumption is relatively low, so AA or AAA batteries should last quite a while. Don't forget to add a switch when you wire up the battery.

(You can click on the image to see a larger version) 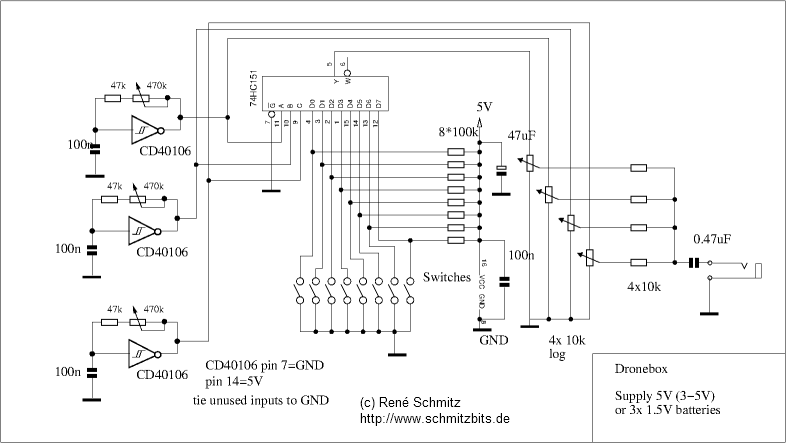 Here is an example of the sound of the box. Its just the raw output of the combiner part. In the beginning the oscillators are tweaked. At the last 20 seconds you can hear some of the changes that are possible with the switches.

Another example. Here the sound runs though a filter and a delay.